Shotokan Karate belts sistem: Originally it was thought that Karate practitioners washed all their training cloths, except for the belt. Thus due to hard hard training, sweet, grass and blood, the white belt will turn yellow, green, blue, brown and finally black. Eventually, or so they say, this progression turn out to be the current belt sistem. This sound like a pretty cool story but I’m sure is only a mit. However, I do known a lot of people that refuse to wash the belts in order to achieve a worn and rugged look as evidence of their years of hard training. Personally, I don’t wash my belt as I don’t the color the fade out because of to much washing.

One thing is sure: Funakosi Sensei didn’t use the belt rank sistem from the beginning. It was his friend, Jigaro Kano, the founder of Judo, who first implemented the belt sistem. Only after that Sensei Funakosi decided to adopt it too. The two of them where close friends, Jigaro Kano was interested in Karate. Funakoshi Sensei taught Jigoro Karate for several month, as Kano was very interested in Funakoshi’s Karate style.

Kano used the belt sistem due to the fact that his new sport, Judo, got more and more popular that eventually it was introduce in schools and collages. Kano thought that a rank sistem will help them track their progress but also encourage them to work for a short term gol. The first color rank sistem used had 6 kyu belts (3 whites, 3 brown) and 10 Dan belts.

In 1938 the sistem was adopted by all the Japanese Karate schools under the Butoku Kai. Thus Shito Ryu, Japanese Kempo, Goju Ryu, Wado Ryu,  Kushin Ryu adopted Jigoro’s Kano belt sistem. Later, after the second world war, the Okinawan schools adopted the sistem also, as before the Kyu/Dan sistem wasn’t well established in Okinawa, with only some schools adopting the sistem before the war.

Originally, each kyu had a Kata required for belt test, starting from Taikioku Shodan and going up, thus:

Note: The above section is only referring tot the specific assign Kata to each belt. This is not a topic about belt requirements, and I will not discut any Kihon and Kumite requirements for certain belts. Please keep in mind that Belt Sistem and Belt Requirements are two different things. For extra information about Shotokan Karate Kata please read my previous article. You can find a link here

Last year, JKA added kuy 10 to the rank sistem. However it does not has a color allocated, being the only Kyu rank that is not associated with a belt. Apart from the extra kyu added to the belt sistem, the Japanese Karate Federation also increased the testing requirements for each Kata. Thus right now, inside the JKS, Taikioku Shodan is no longer testest at kyu 9 but instead is required only when testing for Orange kyu 7. As a result every other kata got moved up, Heian Shodan being required for green belt testing, and so on. Personally, I really like this decision about adding extra kyu and moving up the Kata as it gives students extra time to learn the basic techniques. Many times people rush through, looking to always learn the new Kata. I think the new changes added by the JKA to the current rank sistem are beneficial for building real Budo Karate – Karate Based in Ikken Hissatsu.

Other federations and associations

Apart from the JKA, there are many other federation and associations that use the same sistem or variations of it. Some added extra belts, mainly the number varying from 2 to 4.  Of course, each federation has her own Belts requirements which may be a minor alternation to the JKA standard or in some casesa completely revamp sistem.

Nonetheless, I encourage everyone who wants to build strong Budo Karate to follow the JKA guidelines and do not run after the next belt. Most of the time belts don’t represents our actual level, but more likely where we have been at a certain point in time. I would rather be a strong yellow belt then a week Black Belt.

Thank you for reading! Oss!!!

All the best,
George Paun 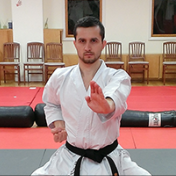